When talking about Italy, it’s probably difficult to have a conversation about Italy without hearing about Rome, Milano, Venice, and/or Florence. Interestingly, these main cities are all in different regions (what U.S. Americans could relate to as “States”). Despite the fact that all of Italy is about the size of California, the regions have a more profound significance within their small, relative size to a U.S. state.

I think I have mentioned before that Italy only became Italy as we know it, in 1861. Let that sink in. The State of Oregon became a state in 1959; it’s older than the Republic of Italy! The significance of this in regards to the regions is that the regions were many things, but it’s easier to think of them as other countries (or better yet, City-states).

So back to the main cities above that most often mentioned, Rome is in the region of Lazio; Milano is in Lombardy; Venice is in Veneto; and Florence is in Tuscany. Of course, these are just a few of the regions. However, when you cross from one region to another, you hear the locals of the region have very strong opinions/beliefs about people from another region.

I recently moved to the Trentino Alto-Adige (Trentino Südtirol) region. This region was part of Austria up until after the 2nd World War. The Austrian influence is unmistakable – the architecture is different, things run more smoothly, rules are followed, being on time means arriving closer to the time agreed upon, and it’s super clean. Those from Veneto (Verona, specifically) said that “Trentini” are really cold and rude. The Trentini say the Veronese are judgemental and rude. Everyone in the north agrees that the southern regions (e.g. Napoli, in Campania; Sicily, Puglia, etc) are lazy and loud (Not my opinion as I have never been to the south).

After 2 years in Verona, I had the opportunity to move up to Trentino. I jumped at the chance to experience something new. I noticed a difference immediately. Aside from the same general language being spoken, I found the points mentioned above, plus people are nicer to me and patient with my Italian. And, I am not sure how to articulate this, I have come to notice that there is a kind of chaos in Verona that I only noticed after being here. I still love Verona; there is something absolutely incredible about that city. But I’m living an adventure – it was time to adventure some more.

After 3 weeks, I can say I really like it here (and I’m in a wee town of 2000 inhabitants). Recycling is really organised and appears efficient. The tap water is pretty good and I no longer feel the need to buy bottled water (i just use a water-filter pitcher and I’m good to go). There is a bus that goes right into one of the principle cities of Trentino (there are two principle cities – Trento and Bolzano). The bus takes a whoppin’ 15 minutes with traffic. I really am enjoying exploring a new city, learning the bus lines, finding the critical stores. I have even joined a gym!

My friends in Verona have asked me if I’m lonely and oddly enough, I am less lonely than I was in Verona. Knowing that I don’t know anyone in town and am therefore alone, is a different feeling than knowing several people in town and having nothing to do because they are busy or have their own families. Plus, I am no longer sharing a flat!!! I LIVE ALONE (said while jumping on bed)!!! I cook when I want to cook. I do laundry when I want to. I clean when I want to. I take a shower when I want to. This is a novelty that I need to soak up!!!

Another benefit of being in a wee town – hardly anyone speaks English. So, I really have to make an effort to speak Italian and to “learn good the Italian.”

As Christmas rolls around and I’m alone up in the snow, I’ll let you know if my enthusiasm wanes. As for today, I am seriously stoked about this! 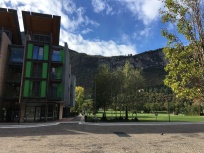 In Trento looking up at waterfall 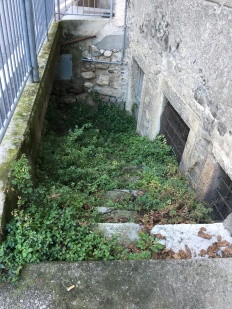 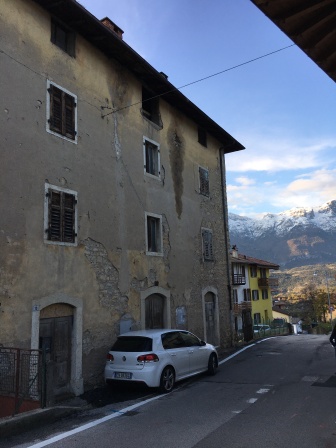 A view from the village